Software AG’s Adabas is a mainframe database that is still heavily used by government sites throughout the U.S. and the world, and this blog focuses on a current Treehouse Software customer – a U.S. State Government Agency that uses Adabas on their mainframe system.

The Agency’s modernization team was looking for a Change Data Capture (CDC) technology solution that enables them to synchronize their mainframe Adabas data on AWS, particularly an Amazon RDS. As with most Treehouse customers, the State’s mainframe contains vital data that must always be highly available, so rather than attempting a complete migration from the mainframe, the modernization teams decided to implement a multi-year data replication plan. This allows the mainframe legacy teams to maintain existing critical applications, while the modernization team develops new applications on AWS.

After researching various technologies, the Agency discovered tcVISION on the AWS Parter Network Blog and contacted Treehouse Software to discuss their project and to see a demonstration of Mainframe-to-AWS data replication.

Addressing the Uniqueness of Adabas

Having specialized in tools and services complementary to Adabas/Natural applications since 1982, Treehouse Software has successfully encountered and addressed many unique scenarios within the Adabas environment. The Treehouse technical team documented three primary issues with Adabas/Natural that the Agency needed to consider when they began planning data replication on AWS:

After technical discussions and a successful proof of concept (POC) that proved out a set of use cases, all teams at the Agency determined that tcVISION real-time mainframe data replication capabilities were the perfect fit for meeting their goals.

tcVISION‘s modeling and mapping facilities are utilized to view and capture logical Adabas structures, as documented in Software AG’s PREDICT data dictionary, as well as physical structures as described in Adabas Field Definition Tables (FDTs).  Given that PREDICT is a “passive” data dictionary (there is no requirement that the logical and physical representations agree), it was necessary to scrutinize both to ensure that the source structures were accurately modeled.

The teams examined the three ways that tcVISION can access Adabas data:

It was decided to access the data by reading the active and archived PLOGs datasets. The schema, mappings, and transformations from the metadata import were tailored to the customer’s specific requirements.  It is also now possible to import an existing RDBMS schema and retrofit it, via drag-and-drop in tcVISION, to the source Adabas elements.

Additionally, the Agency’s teams are very pleased with tcVISION‘s minimal usage of mainframe resources. The product’s “staged processing” methodology accomplishes this, whereby the only processing occurring on the mainframe is the capture of changes from Adabas PLOGs. The bulk of the processing occurs on the AWS side, minimizing tcVISION’s footprint on the mainframe as seen in this diagram: 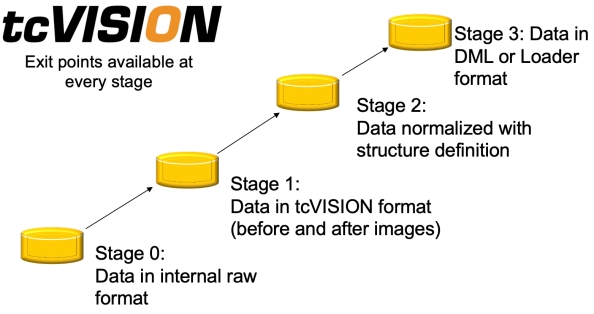 The user defines on which platform stage their processing should be done. Do as little as possible on the mainframe: Stage 0 – capture data and send data (internal format) to target, and process data in Stages 1 – 3 in AWS.

All requirements were met by tcVISION, which led to a successful project implementation.

No matter where you want your mainframe data to go – the Cloud, open systems, or any LUW target – tcVISION from Treehouse Software is your answer.

Just fill out the Treehouse Software tcVISION Demonstration Request Form and a Treehouse representative will contact you to set up a time for your online tcVISION demonstration.

Many more mainframe data migration and replication customer case studies can be read on the Treehouse Software Website.